Researchers tell us that 75% of our players in D-7 and throughout the USA drop-out of playing soccer between the ages of 10-15.  I have decided to try and figure-out why such a drastic result.  So I sat down and put myself into a typical Youth Players (YP) players shoes.  Here is the scenario that I came-up with…

Youth Player (YP) is told at a very young age, “I have signed you up and you will play soccer this year!”  This is followed by, “We are driving to the soccer field, right now, for your try-out!” Here YP is introduced to a total stranger and coaxed to follow and obey the clip-board holding individuals’ instructions! 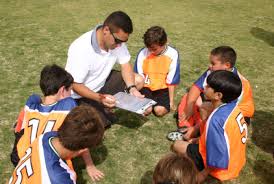 The Clip-Board Holder in turn walks YP to a large group of strangers sitting under a tree with very anxious looks on their faces.  The group is then divided into smaller teams and YP is assigned to one of those teams and told to start playing soccer. The Clip-board holder has more clip-board holders intently watch and take notes on YPs   playing abilities.  At the end of the day the clip-board holder congratulates YP who is informed that he has made the Recreational Team.

Several days later YP is introduced to yet another stranger and asked to call the stranger by the simple term of ‘Coach’.  Notes: Coach, in many cases, has just been asked to volunteer for the position because no one else made themselves available.  At practices: Coach has YP run laps, lectures to YP and keeps YP in line by having YP stand-in-line.  At games: Coach is heard to give YP continuous compliments.

In the following years, as YPs skills develop, the Recreational Coach is informed that YP has been transferred to the Advanced-Recreational team.  Notes: Coaches, in most cases, have a few years of experience under their belt.  At practices: YP will seldom run laps, have to listen to shorter lectures and seldom wait in line.  At games: Coach is often heard to give play-by-play instructions.

After some years the  Advanced-Recreational Coach is told that YP has developed enough to make the Competitive Team.  Notes: Coaches, at this level, are often licensed and paid for their services. At practices: Hopefully YP will be constantly active and involved in some type of small sided game or scrimmage. At games: Hopefully YP will be given specific instructions only during stoppages of play .

However, the Competitive Team Coach will usually feel obliged to put YP on-the-bench to avoid conflict among the current roster.  YP, if motivated, will eventually work his/her way into the starting line-up.  But, YPs often find themselves back on-the-bench bench when a ‘guest-player’ takes their place during crucial games.

I realize that all actions have consequences -for a player -a team -for everyone involved – And right now we have no answers for stopping the exodus.  So I am asking YOU for suggestions on what WE can do to stop 75% of our players from leaving the game between the ages of 10-15.

Please send your thoughts/suggestion/comments/ideas/etc. to me: