For some time, the most recognized and acceptable way to officiate soccer games has been to use the 3-official system.  In recent times, however, the 2-official system has gained popularity, especially in lower levels of play. Its use has become necessary due to the constant decline in the number of licensed and available officials.

The 2-official system does have some strengths, but it also has many weaknesses.

Having two officials with equal powers making decisions regarding fouls, advantage, and other critical calls may be advantageous. Still, conflicts can arise when each official makes decisions based on their angle of view of the action.  Conflicting decisions may lead to both officials’ loss of authority and trust and a potential loss of game control.

A potentially worse scenario would be if both officials have different interpretations of the Laws, have different officiating styles, and have not resolved those issues before taking to the field. 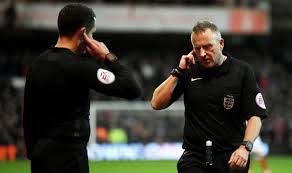 Another strength is that two officials will both be more involved and stay focused on the game.  However, they will have more duties and responsibilities. At times, they may have to overlook one to take care of another.  For example, while concentrating on making challenging offside decisions deep in the attacking end of the field, an official may find it difficult to judge misconduct away from the play.  Another example would be concentrating on a ball about to cross the touchline. While still inbounds, the ball is passed to a teammate who may or may not have been in an offside position at the time of the kick.

Discussions regarding physical demands are mixed.  In a 2-official system, some believe that each official only covers half of the field, so the demand is lower than one official covering the entire field.  Others argue that the physical demand is the same, if not more demanding. When properly executed, the 2-man system requires the officials to constantly move up and down the field and from their touchline to the middle of the field.

Perhaps the most popular reasons for the 2-official system are that it is easier for assignors to find officials, and it is cheaper.  For some matches, the ones less competitive, played on smaller fields and slower, this system may be adequate, but how many of these matches are there?  How often do “friendlies” or non-competitive games start out as such, and as soon as fouls are committed or goals are scored, they turn into wars?