Does Getting the Ball First Shield Players From Committing a Foul?

Due to some misunderstandings by many regarding a section of Law 12, the wording was changed in the 2008-2009 revision of the Laws.

Prior to the revision, Law 12 (Fouls and Misconduct) stated that when a player decided to tackle an opponent and made contact with the opponent before making contact with the ball, a direct free kick was awarded.

This wording unfortunately left it up to anyone’s interpretation and the idea that anything is legal “as long as I get the ball first” spread throughout the soccer world. 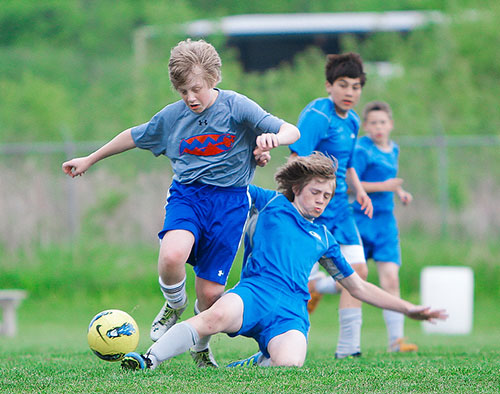 Because tackles and charges are legal parts of the game, as long as contact with the ball came first, any action before, during, or after the tackled was thought to be acceptable.

The wording under Direct Free Kick was changed and currently includes the words careless, reckless or using excessive force.  Now, first contacting the ball does not necessarily make a tackle legal.

The new wording directs the officials to consider the actions of the attacker prior to, during and after the challenge.  The direction of the tackle, the speed of the attacker, the location of the tackle on the opponent’s body and whether exposed cleats came into play guide the officials toward making the decision as to whether a tackle was careless, reckless or with excessive force.

A tackle from behind may raise concern and demand close scrutiny but is not necessarily unsafe if it does not put the player in danger.  An out of control tackle, even after having made obvious contact with the ball first may lead to a caution or send-off.

A player sliding in, locked straight leg with cleats exposed, and making contact with the opponent’s exposed knee has all the signs of a send-off foul (red card) committed with excessive force.

The decision to apply advantage must be decided carefully depending on the level of play, age of players and severity of the foul.  Game control should always be a consideration as should the safety of the players.