This question often surfaces in the mind of officials, recently licensed or experienced, who aspire to become one of those “good referees”. One thing that immediately comes to mind is that the referee must act to control the game before the players take control of it.  It is far easier to lose control of a game than to regain it. 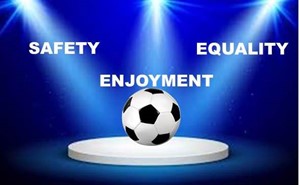 How do the “good referees” get and keep control of a game?  Most referees are aware of three elements:

What is not always recognized however is that the order of importance of those three elements varies between referees, coaches and players.  The order will also change with the age and experience of the players.

For coaches and older players the order becomes: Equality, Safety and Enjoyment.  To have successful game control without excessive interference, it is important to recognize these priorities and referee accordingly.  To emphasize the idea of this order, a few years ago FIFA introduced the slogan “Fair Play, Please” which can be seen displayed on uniforms and signs around the world.

In adult and older youth games, the referee needs to look beyond calling fouls and misconduct.  In order to achieve a well-controlled game, where problems and acts of gamesmanship decrease, he/she needs to look at what is fair or not.

In other words, change the focus from the wrongdoers to the player who has been wronged.  If a player is fouled enough that it affects his/her ball control, a referee needs to take action or sooner or later the wronged player or a teammate will.  When that happens, the players start to take control of the game.

Your “justice” does not always have to be a stoppage and a free kick or the showing of a card.  Often a word or some action directed at the wrongdoer that the wronged player can witness may be enough.  The action may even be applying the advantage however, make sure not to overuse the advantage as many less experienced players prefer the free kick. Justice needs to be seen in order to have been served.

If the referee’s focus remains on looking for fouls and misconduct, which will occur in most plays between opponents, the game will suffer from excessive stoppages or will be under marginal control.