The IFAB Laws of The Game, specifically Law 4, states “A player may not use equipment or wear anything this is dangerous”.  It is a duty of the referee to inspect the players and substitutes prior to allowing them to take part in a match.

Players wearing equipment that is unauthorized or dangerous to themselves or others are not allowed to play until the item is removed.  All items of jewelry are forbidden and MUST be removed (not covered with tape or other material).

Players unwilling or unable to comply are not allowed to participate or continue to participate in a match (if the item is discovered after the match has begun).

Officials need to enforce the safety rules.  Identifying a safety rule and not enforcing it could lead to the official being held liable for a player’s injury. 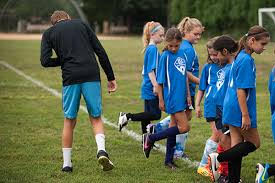 Officials who should reasonably have been expected to notice a safety violation and do nothing about it are putting themselves in a potentially bad legal situation.  If an injury occurs, one may wonder if the official was aware of the potentially dangerous situation and why he or she didn’t do anything about it.

Overlooking the Laws will put a heavy burden on the official who will need to explain why he/she should not be held responsible for the injury.

Leagues administrators, coaches, players and parents must all be made aware that safety rules must be enforced.  The Laws place the duty on officials to police illegal and unsafe equipment.  Even if a league modifies or removes some Laws that should in no way convince an official to overlook an obvious safety risk.

It is not acceptable, undermines the official’s authority and strips him/her of their duties when moms, dads and coaches do not support the official’s decisions as listed in Laws 4 and 5.

Some officials, especially at the lower levels of competition, may decide to take the risk of overlooking violations in order to increase their chances of being assigned more games or to minimize the conflicts they will encounter with administrators, coaches and parents if they enforce the Laws.

Officials have the responsibility to enforce the Laws of the Game and to make sure the players are as safe as possible during the activity.

If officials do what the Law book says and do it every time, they will greatly reduce their legal exposure.