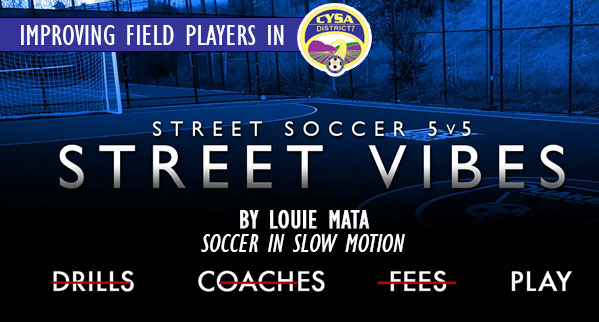 It’s summertime and across the US players are playing pickup games!

In San Jose we are hosting open play days with a great turnout and a mix of ages, skills, and boys and girls. The image below says it all. So let’s talk about a few scenarios that people at first may see as challenges here.

From a street soccer perspective (also described as the advanced skill category – see definitions below), the variance in ages and skill is a welcome opportunity. However, many soccer players might see the “mismatch” as lacking a challenge and not a good playing opportunity. It might even prevent game play from taking place because parents are worried about younger players getting injured by the bigger players.

So what is the difference from the “street scene” that makes game play entertaining vs. the “soccer scene” that see’s danger and a lack of challenge?

First let’s review and compare the definition of what street soccer is to both the street soccer community and to “regular” soccer players and parents. In the street soccer community “street soccer” is known for its advanced ball control skills. We’d rather hold onto the ball and test our skills rather than score an easy goal. Shooting with power to score is not something done too often; it’s the execution of a technical skill that’s significantly more rewarding. Scoring goals is not the reward; it’s challenging oneself to incorporate a wider variety of skills into a session that carries more weight.

On the other hand, street soccer to “soccer players” is often seen as open play with little to no coaching. Now while this is a fairly decent viewpoint on it, it significantly overlooks what the street soccer community” gets from playing these loosely structured pickup games.

So you have the two different viewpoints above, now let’s look at how game play is affected. If the pickup games are still primarily about scoring goals then you will have a higher risk of younger players getting injured by shot from bigger players. But even under these circumstances older players can be instructed to be more cautious. Older players could practice passing more, but one can see how this too would lead to boredom of a more skilled group can both outrun and pass better than their opponents. Simple enough variation to help that, just mix up the players (and hope an overly ambitious player does hit a hard shot trying to beat his now older opponent) and put the other players at risk.

Okay let’s get to the challenging and safer game play as the street soccer community knows it! These open play opportunities are now about running up a score at all. They are chances to showcase the depth of your skills and the number of ways to panna (nutmeg/tunnel) your opponents. Goals are score after a complex trick, not just because the goal is open. Even better, two skilled street players can execute combos together against their opponents (regardless of the age of skill level) because the play is not dependent on your opponents’ abilities, it’s dependent upon yours.

Challenge your “soccer players” to showcase their tricks, not merely their ability to score (especially on smaller playing areas. Suddenly, their ability to do a scissor move and beat an opponent hold less weight, we want to see your arsenal of attacks. Can you panna a younger opponent? Can you panna 2 players back to back and then score? Can you execute an akka to score, can you panna a defender as you score? None of those challenges above involve speed or power, they require technical ball control skill, they require peripheral vision, they require an understanding of how to manipulate defenders, or split defenders with a pass.

When is the last time you tried to panna two 8 year olds? They have shorter legs and they come at you quickly! Sure, a 15 year old can pass the ball away or dribble with speed away from the younger player. But can they execute moves against the young player? Unfortunately I’ve  found that  even experienced 15 year old players have a very, very limited amount of skills to draw from. We’re not asking enough from our players and too few are satisfied with scoring as the end goal.

It’s the creativity we should challenge our “soccer players” with; challenge them to become highly skilled “street soccer players” and watch their confidence and ball control skills take off Like these World Cup Players!