Youth soccer, like all sports, has as its immediate and specific objective a team being victorious in a game. To make youth soccer available to all kids, thousands of volunteers give selflessly of countless hours of their time, donate incredible talent and expertise, and endure all kinds of stresses and disruptions of their personal and professional lives. The givers include treasurers, match secretaries, registrars, field managers, and many, many others, especially volunteer coaches and other team officials.

Because the goal of youth soccer is to win, we would expect all those that give so much to be able to know when they have in fact “won.” But the truth is that it could be very hard to know if you have won or are a winner in youth soccer. Consider a TOPSoccer match. Is the coach of the team that scored more goals than the other team in a TOPSoccer match the “winner” and is the coach of the “defeated” team the loser? Or are both coaches “winners”? The answers will depend on your values and the true purpose of your involvement.

If your purpose is to beat the opposing team in a game, the answer is that the coach of the team with the most goals is the winner and the other coach is the loser. If your value is to help children grow, master essential life skills, and mature, the answer is both coaches are winners. How do you determine what your or the values and purpose of others really are? Words they use may be helpful, but then again words can be misleading even to those using them. To be sure consider the conduct. There is much truth to the saying that actions speak louder than words. 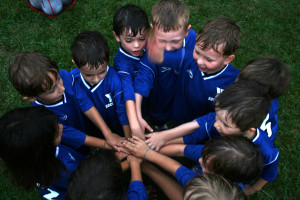 Some examples of common situations help make the point. The red team and the blue team with their team officials and parents arrive at the field for a game. Each team has an outstanding player that is moderately injured. Late in the second half, the score of the game is tied. The blue coach decides to substitute in his injured player to try to score a goal; the red coach thinks about putting his injured player in but decides not to do so. Which coach is the winner and which one is the loser? If you can answer this question without knowing the final score, your value and purpose is to promote children in the larger sense of helping them grow, learn, and mature. If you need to know the final score to answer the question, it is somewhat difficult to know exactly what your value and purpose are other than to say they are something other than benefiting kids.

The red and blue teams have full rosters of moderately talented layers. The players have regularly attended practice and played all year for their teams, including in tournaments and throughout the league play. As the deadline for freezing the rosters for purposes of playing in State Cup approaches, the coach of the red team and the coach of the blue team are approached by Kristi Kicker, a outstanding national pool player, who wants to leave her existing team and asks both coaches separately if she can join their teams. To make room for the outstanding player on the roster, both coaches would have to get rid on one of his existing players. The red team coach informs one of his players that she is no longer needed on the team, drops her, and transfers Kristi onto his team. The blue team coach tells Kristi that he is sorry but there is no room on his team roster. The red team is victorious in the State Cup and is crowned state champion. The blue team is knocked out of the State Cup competition in the quarter finals. Is the red coach and team or the blue coach and team the winner? If your value and purpose is to succeed in the State Cup, the blue coach is the winner. If your value and purpose is to help kids grow, learn, and mature, the blue coach is a winner and the red coach is a loser.

Winning depends on what you are trying to accomplish. If you consider winning in youth soccer, as I do, as benefiting children in the greater sense of helping them grow by teaching them worthwhile values by example, helping them learn lessons such as morals and ethics that will serve them well throughout their lives, and assisting them in maturing into responsible adults, will you ever really know if you won? The values you advanced take time to grow and show themselves in the children you served. There is a good chance you will not see what you actually achieved as the children move on with their lives. So, did you win? You may not ever see the specific example of your purpose being achieved, but you did win, and you won big. You know it and I know. More important, each of the children you served knows it.