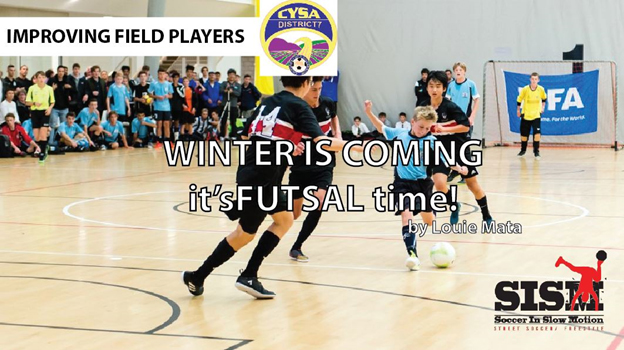 Winter is Coming… that means it’s time for some futsal everyone!

Perhaps you’ve never been to a futsal match, maybe you’ve never seen the higher levels of youth play at the regional or national level. We have, and plenty of it! As a matter of fact, SISM’s coach Louie Mata has won two national futsal championships throughout his playing career playing under, then national team coach, Cony Konstin.

Futsal’s 5v5 format on a hard surface is a great skill development tool. Players get more touches on the ball, they need to be prepared to play offense and defense. Futsal can be described in a number of ways, it’s an organized version of street soccer with its small-sided game play and lots of scoring. That’s why we enjoy it so much!

Check out this video with nearly a million views. In it is Leamssi and Bencok. If you’ve followed SISM you might have been with us in San Jose when they we at our house for the week as we prepared for the American Panna & Freestyle tournaments!

Where you here when we brought some of the world’s top street players to the Bay Area? See those highlights here.

So join a futsal program this winter and improve your skills for the outdoor game.

Until next month, happy holidays!