Winning proves everything we are told. It identifies perfection and the highest ideals of sport, who we are led to believe and yet we have all these awards and winners but far fewer real players and coaches. The problem is compounded by the Al Davis’s of the work who trumpet out, “win, baby, win” every day in the media. Statistics back up the claims the vast army of youth coaches and parents suddenly see the Holy Grail of success staring directly at them. Winning solves and proves all. Or does it?

At professional level, a win is a win is a win. You have yet to see a pro coach reject an ugly win. On the other hand four or five losses, its “hasta la vista” and on your bike! These coaches know most of a player’s development is done by their late teens and competition is the next phrase of heightening that talent. They know their athletes have matured both physically and mentally to deal with the many ups and downs or pro sport. Mr. Davis is totally correct about the importance of a win in the pro arena but down on the sandlot he would probably rephrase his quote to, “learn, baby learn.” 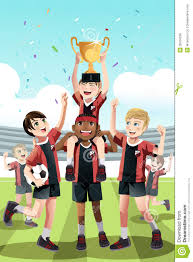 Unfortunately the youth scene takes these images of the only things in life are to win without thinking about the environment and youngsters. It looks the same – the ball, the field, the game, the uniforms, etc. So they mimic the picture that is on the screen and learn to talk the talk. It’s official with all these mini-pros and Bobby Knight look-a-likes pacing the touchlines. They have, however, forgotten two things- the children and their development needs.

To blindly imitate means short term winning and long term losing. It looks good at the beginning, winning the U5s Post-Natal-Cup, pounding opponent into the ground with an incredible winning record. “This is what it’s all about!” PuttPutt her we come! Suddenly, parents who up to that point used to get a nose bleed competing at checker are talking contracts and scholarships for their youngsters. Luckily sanity is slightly restored when children turn around and say “we’ve had enough. Skateboards and the open road, her we come.” Off they go, never to be seen on a competitive sports field again.