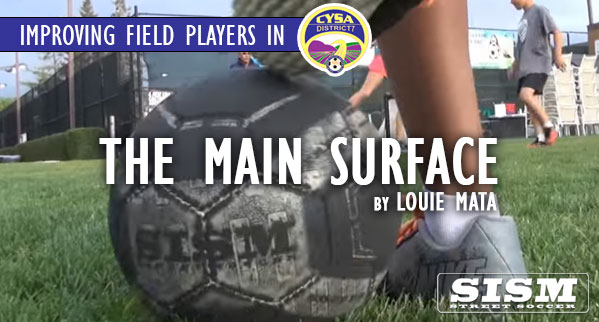 Improving the ball control skills of our players, future superstars; when new soccer players join us we often see a similar issue, not enough players understand that the bottom of the foot is a valuable part of ball control. I will say that futsal players understand this as its part of the skills used in futsal, but too many young soccer players do not. We see players primarily using the inside and outside of the foot, every touch resulting in a ball that is moving away from them, a ball that they must get back to with another touch.

When players use the bottom of the foot the ball is securely stopped under their foot. Opponents do not know which way the ball will move next and it allows for many options. In our program we have players who compete in the high level “street soccer” events and competitions. The bottom of the foot is main surface of the foot used. However, the gap between what is taught to young soccer players and the advanced skills used by experienced “street soccer” professionals are too wide. Our younger players must be taught to effectively use the bottom of their feet.

Street soccer professionals???  Did you know that some of the best travel to Prague every year to compete, some are sponsored by the likes of Adidas, and some can be found in commercials you may have seen. Although an example involving freestyle and trick shots, who remembers the 2014 World Cup Commercial where young Ciaran Duffy, aka “Mini Messi” was flown out from Ireland to Brazil to shoot the commercial seen here:

Young Ciaran has represented SISM over the years and currently plays for Manchester United’s academy program.

There is much to be done to help our upcoming soccer stars reach their full potential. SISM is working away every month and reaching out to more and more players! We hope to see your young players at the next club event!

If you’d like to bring a street soccer day to your club, academy, contact us at info@soccerinslowmotion.com. And if you’re looking to join in an upcoming day of exciting street soccer we have another opportunity coming up next month. You’ll find us with the City of San Jose ‘Family Fun Day’ on October12th at Lake Cunningham Park.