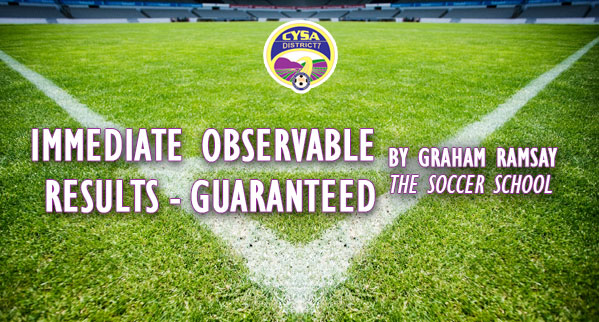 (a) Play on a smaller field: Pros immediately understand the importance of space, amateurs rarely do. If you are playing on a regular sized field and your opponent is superior then a loss is coming your way. By shrinking the field and getting organized you can negate their ability to where you have leveled the gap in ability.

(b) Fitness: Unfit players and teams deserve to lose.

(c) Playing Surfaces:  If you have the facility of two or more different playing surfaces then let your opponent always play on an alien pitch. That is if they always play on “turf” then put them on grass and vice versa.

(d) New uniforms:  Leeds United when their coach Don Revie took over a struggling 2nd. Division team he immediately changed the strip by copying the best team in the world – Real Madrid. It signaled a new beginning & attitude.

(e)  Tactics: Organize so players understand their role and what is needed to make the team competitive.

(f)  Keep training and playing scores/records: It’s an important part of the process – be it passing records, fitness scores, etc. and highlight new records. If you have a notice board put the scores up or your team manager emails the new records to everyone. Promote energy all the time.

(g)  Community Programs: Get players involved in the community. It may be coaching at a local program or club to even helping with another sport or charity.

(h) Positive mentality: Be proud of your efforts and the team.

(j) Unplug: No I-Phones or headphones during ‘team time’. Instead, ‘plug’ into the team and each other, not gadgets. As they say “there is no “I” in team.