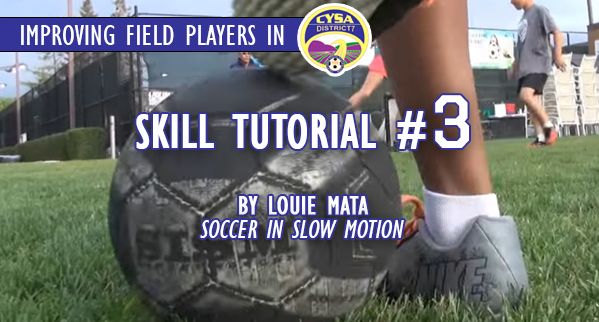 Skill Tutorial #3 – Peanut Butter and Jelly – Also known as the Pull Back Behind the Leg!

Welcome to this month’s article, where did we leave off? If you missed last month’s article on juggling techniques you can catch up here in the January Komments! Also, in January’s SISM Winter Training Program we put the two juggling teaching methods to the test to find out which one worked best for various skill levels:

Which was the best method??? Let’s begin with the age and skill level of our group: Our players ranged from 8 years old up to 11 years old and most were not yet comfortable juggling. So we created two group based on similar ages. Although I expected all age groups to benefit from dropping the ball directly to the foot, our younger aged players appeared to benefit more from Method A with a bounce first. Our older group progressed well with or without the bounce. The verdict? If you have a solid surface you can take advantage of the bounce method, especially for your newest players! Try out both methods with a group of your players and let us know which technique you liked best for your players.
So let’s move on to this month’s skill and get right to it. The video shows everything you need to be able to teach it. It’s a skill that looks relatively simple but has some subtleties that make it really effective. The pull back move is a very practical move done in 3 touches, yet I find that many players underestimate the precision with which it can be done.
A simple example: Touch #3 should be in front of us for the most options. If touch #3 is behind us we cannot attack forward immediately.

Watch the video and check out the skill in use in game play at the end.

One of my favorite benefits to this skill is that we are in a shielding position and protecting the ball when it is behind us! My second favorite benefit is that we have many options as we exit this move and transition into the next based on what the situation presents us.
That’s it for this month’s skill! So off you go!

Happy 2019 everyone!
Louie and the SISM team