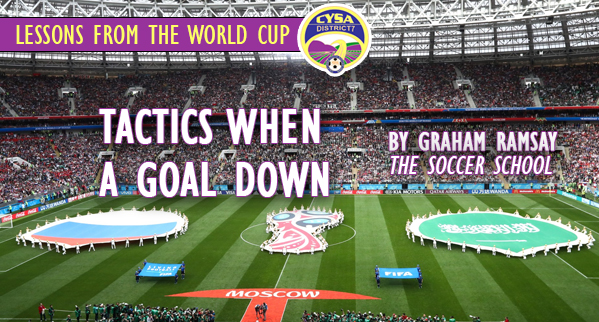 It is interesting to see teams with a “plan B” when it comes to the place when time is running out and you are a goal down. What to do?

These are some options:
(a) Fresh legs – Bringing subs on

(b) Quicker tempo of play – one and two touch passing, especially around their box.

(c) Setting up play in wide areas to get crosses into the box.

(d) Encourage players who have shooting talent to shoot from outside the box.

(e) Look for rebounds- be on top of their ‘keeper if they “spill” rebounds.

(f) Penetrative dribbler- One that goes at & past opponent. One who forces defenders into rash challenges.

(g) When their ‘keeper has possession the defending forwards mark loosely, especially their least competent player in the back to encourage their ‘keeper to pass the ball to him/her, then look to ambush the pass.

(h) Be positive & encourage each other. No heads down.

To come back in a game and win will live in the memory. Teams with this spirit will rarely lose games as such teams have this real “team spirit” that’s a force unto itself.