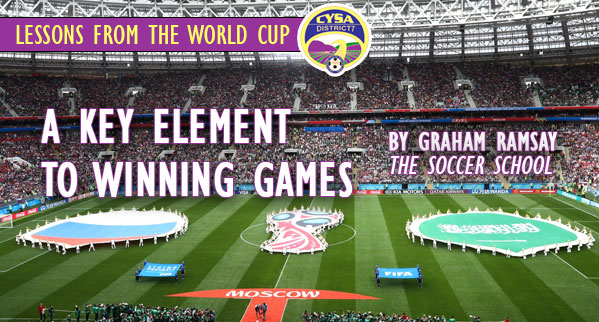 The more regulated the game becomes the more the referee play a part. This World Cup was a testament to that. Look at how many goals have set plays as their source. Therefore coaches must give time to both attacking and defending set plays or pay the price.

Corners, free kicks and throw-ins especially deserve serious practice time. I helped a D3-Mens team get to a national D3 NCAA Final on goals whose source was 75% of the goals came from set plays.  If you watched the World Cup you could clearly see with a bit of skill free kicks around the box are pretty lethal.

I would add throw ins as they are treated with disdain as what’s the big deal about throwing in a ball as it seems such a minor event. If you care about possession it is a major factor. It blows my mind when a team treats a throw-in as nothing event until it becomes the source of a goal to our opponents. Try it a couple of times!! Throw-ins have a lot of pluses going for them besides possession as it allows you to speed up or slow down play.

If you are a keen student of the sport get someone to do a statistical chart on your set plays. You might use this World Cup as a study.