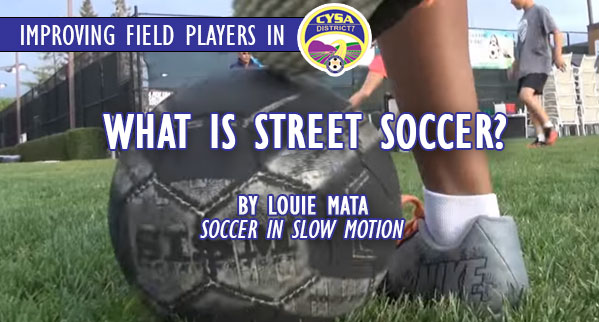 Welcome to this month’s article on skill development with Soccer in Slow Motion.

This month we want to share with you a new street soccer term and share how it’s used. We’ll share a compilation video here and then in next month’s article we’ll break down a couple simple ones! The “akka”, it refers to a move that changes directions of the ball in the air. If you’ve heard of “the snake” that’s performed on the ground then you have an idea.

What makes this set of moves so special? There is no limit to the variations of moves and players have taken the basic akka and made them even more advanced. They are hard to defend, especially if your opponent does not know of them.

The compilation video below shows how they’re put to use in game play, can you spot the SISM players in it? But before I continue, let me step backwards and answer the question: what exactly is street soccer again? In street soccer there is an emphasis in showcasing one’s mastery of the ball, it’s the practice zone for players where executing a skill they’ve been working on is more important than scoring. It’s a focus on outperforming their opponent over shooting on an open net. The goals don’t move and they’re always in the same place; on the other hand, your opponents vary in size, speed, knowledge, and skill. That’s what street soccer players value in their quest for skill development, the confidence to dominate through skill.

So coming back to akkas: these moves allow us to split defenders, pass a ball behind your opponent, and escape from tight spots where players might otherwise be trapped due to a lack of space. We’ll cover more variations in future articles.

So check out this video clip and see how effective it can be!

If it looks like a creative form of expression and ball mastery, you’re right. And when you have several as part of your arsenal of moves, you’ll understand the confidence that comes with them.

We look forward to next month’s tutorials!
Louie and the SISM team