I was invited to be part of Kings Canyon Reedley Youth Soccer Leagues opening day Ceremonies. When I got to the campus I was shocked when I couldn’t find anywhere to park my truck, then when I got to the Reedley practice field there was At least 3500 people there just having so much fun. I amazed by just an overwhelming feeling of good vibes!!! 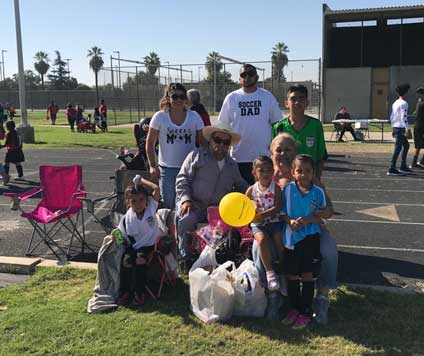 The event was MC’d by televisions celebrity channel 30’s Newscaster Tony Cabrera he did a wonderful job. The Reedley High schools ROTC’s Color Guard did Our Flags Arrival. But then this young lady who was in her referee outfit grab the microphone and sang the star spangled banner that was flawless her voice was just so amazing!!! So if she doesn’t become one of FIFA’s best referees she definitely has a backup plan if she needs it 🙂

The teams were announced that participate in their Fall season which included teams from their adjoining community of Parlier. There were face painting booths, Food vendors with BBQ, shaved ice, churros, as well the Fresno FC team was represented by their team mascot in which the kids just had so much fun taking pictures with the Fox!!!

I think the thing that hit me and filled my heart with joy, was a family I noticed as I was leaving this event… They had three generations at the event and it reminded of my early years as a player and having my family on the sidelines during my match, and the fun after the game with my friends and family on my team.

I just want to say thanks for the positive message that this little town of Reedley gave me that day. There is hope for our membership and this group proves it!!!