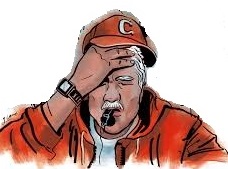 If we win, I’ll read that it’s because the more talented girls got too much playing time; that I’m too competitive; that I’m pushing them too hard; that I’ve managed to crush the souls of the players on the bench. If we lose, it’s because I played the developing players too much; I am ruining the stronger players’ chance at future glory; I’m not pushing them hard enough. What do we even do during practice anyway?

I am not a professional. I am a parent who loves the game and has the desire to pass that on. I accepted the role I was offered; not for a pay-cheek, not for status, certainly not for praise. I accepted this role because I have been where your daughter is now. I see myself in her missteps and in her triumphs. I have felt them all and I feel them all over again through her. I, too, have been bruised by a ball, pulled muscles in tough tackles and played with a broken heart. I also had coaches who believed in me, just as I believe in your daughter.

Knowing I had someone in my corner who challenged me and called out my excuses was the greatest reward of my years in sport. I vaguely remember the final scores of even the most important games, but I sure remember how I felt. Winning doesn’t promise pride, just as losing doesn’t guarantee disappointment.

Please Do Not Ever Forget That…

The Outcome of Our Children Is Infinitely More Important Than

The Outcome of Any Game They Will Ever Play! -Karl Dewazien