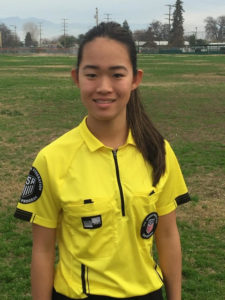 Question: How and Why did you become a referee?

Lynlee: I became a referee for Robert to learn the rules of the game and further my knowledge in the sport of soccer. Once I got into it, I realized how much more the job was and that I had a lot of fun refereeing games.

Lynlee: I dislike the snide comments both coaches and parents make on the sidelines, even though I don’t show anything. I believe that one should be experienced in the job before they can start commenting on how a referee does during the games.

Question: If you had a magic-want what major change(s) would you make in youth soccer?

Click here and join us at FUNdamentalsoccer.com to see Lynlee’s answers to:  What do you enjoy the most about refereeing? What “words of wisdom/advice” would you like to share/give to: Experienced Referees; Beginning Referees; Coaches; Players and Parents?