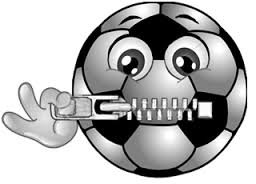 Rule #5: Silence Can Be Deadly.
The usual response to your sideline comments is a tug on your shirt from your spouse, a glare, rolling of eyes by your neighbors, and a silent promise by your child to change their name and become an orphan. However, there are those times when your comments result in a sudden pall of silence and you’re becoming the center of attention from the sidelines and the field. Sort of like in 4th grade when you fell asleep in class and made a funny sound when you startled awake. This means you have “Crossed The Line” from being an obnoxious parent/fan to another status entirely – such as the “Unknown Brother” at a U-16 Regional’s game making anatomically uncomfortable suggestions about where a referee’s unblown whistle should reside. When silence falls and you are the focus of everyone’s attention it may be time to announce that you are overdue at the hospital to perform a lifesaving operation and to slink away at top speed.